Back in September, 2005 while I was Series Manager for Formula BMW USA, we were invited by the BMW Williams F1 team to attend an F1 test session at Silverstone. So, we sent invites to all of the competitors in FB USA at the time (26). We told the parents that three of us from the series management would escort the drivers and it would be a great experience.

Michele Henn, who really did all of the work at FB USA, Clay Filson, who headed up all things technical in the series, and myself would take some teenagers over to the UK. Sounds fun!… and it was. Three of our drivers agreed to go. They were Robert Wickens (twitter @robertwickens), James Davison (twitter @JDDavison21) and Reed Stevens. Reed, at 18 was the oldest. Robbie was 16 and I think James was 17.

We all met at New York’s LaGuardia… and off we went.

Strong navigation would be critical to a successful trip. Driving on the wrong side of the road is always a challenge.

We were told to change our priorities and then to give way as we exited Gatwick.

We had several months to plan this trip and when Michele – who is a top-shelf navigator – casually mentioned the words “Milton Keynes” as one of the towns we’d be passing through, I got very excited. Not because of the race teams that are based there (this is where the Red Bull F1 team is based today), and not because of the thriving cottage industry of fab shops who support racing that are based there. It is because Milton Keynes is home to Marshall Amplification. So Michele made sure that we included a visit to Marshall’s HQ in our itinerary.

Not a good time to bother the driver as the driver is getting accustomed to wrong-sided driving. “Strong Navigation!… please.”

I felt that this trip was all about education for our young drivers and what better time than now to learn about where Angus Young, Ted Nugent, Slash, Eric Johnson and Ace Frehley – too name just a few – get their sound? So, once we left Gatwick and got our bearings – but before we even got to our hotel – we went to Marshall.

I am livin’ the dream right here….

I asked if Jim Marshall was in. He was not. Bummer. But the lobby was fantastic. I just stood there in awe thinking about how this facility had turned some wood, wires, knobs and tubes into life-changing culture-forming unforgettable sound. James, Reed and Robbie were unanimous in what they thought of visiting Marshall Amplification. It made them all hungry and they wanted to go eat. They were clearly affected. 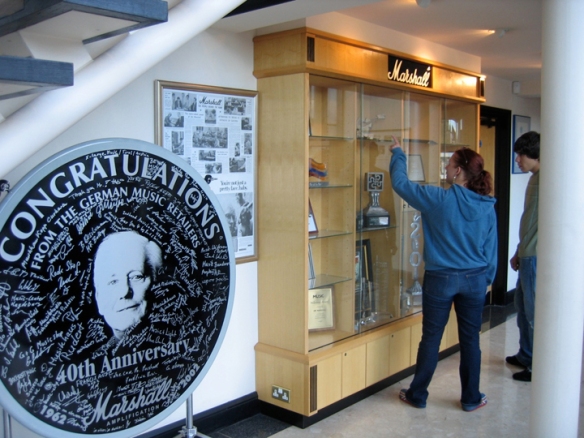 Clay knew how excited I was to be there and after we had all loaded back into our rental, he actually went back in to the office and got some free swag. Pins, key chains, and a great CD of music pushed through Marshall amps. Brilliant!

We took some time to stroll around Milton Keynes, found some food, and enjoyed the culture and great weather.

Reed Stevens taking in the UK way…. note the sign above his head.

Then we loaded up and headed towards Grove – home of the BMW Williams F1 team. We did encounter some traffic and even got to see the Queen (her majesty), Queen (the band) and the Beatles emblazoned on various vehicles touring the motorways. How royal is that? 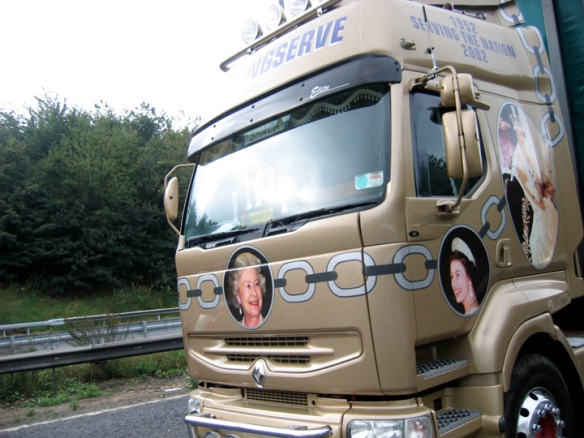 We stopped at a service center along the way and what are the odds that where we would stop to stretch, snack and use the restrooms, would happen to be at the facility that has been awarded “Loo of the Year” for three straight years! This was shaping up to be one heck of a trip. 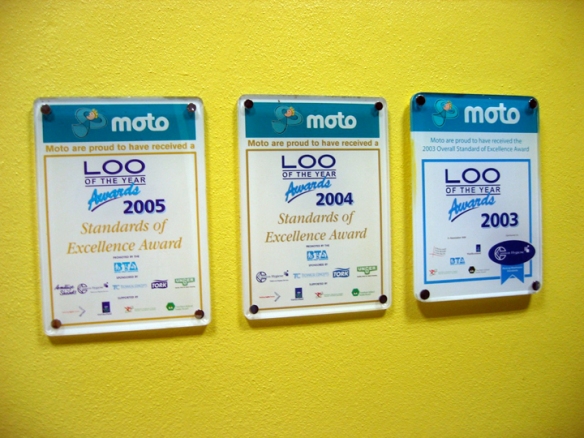 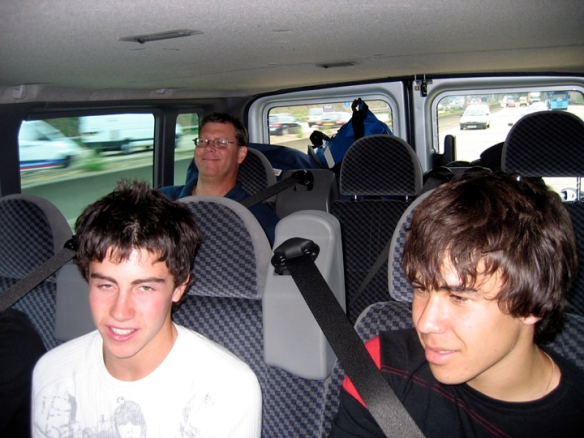 We checked in to our hotel and were excited about tomorrow and our visit to the BMW Williams F1 factory and conference center. 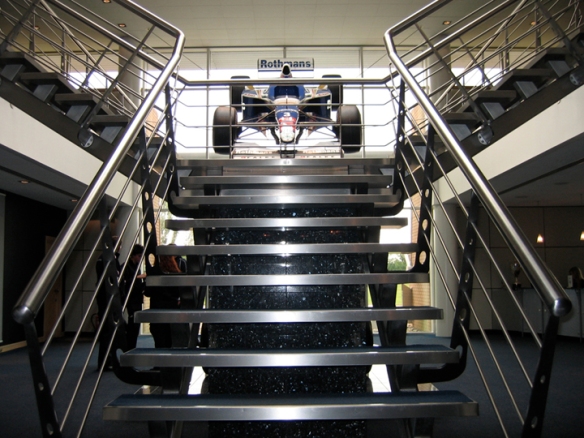 Today we would visit the BMW Williams F1 factory and the Williams Conference Center. We would be treated to a private tour by none other than Jonathan Williams. Jonathan is the son of Sir Frank Williams, CBE, who founded Frank Williams Race Cars in 1966. Ayrton Senna, Nigel Mansell, Alain Prost, Jacques Villeneuve and Keke Rosberg to name just a very few, have all driven for Williams. 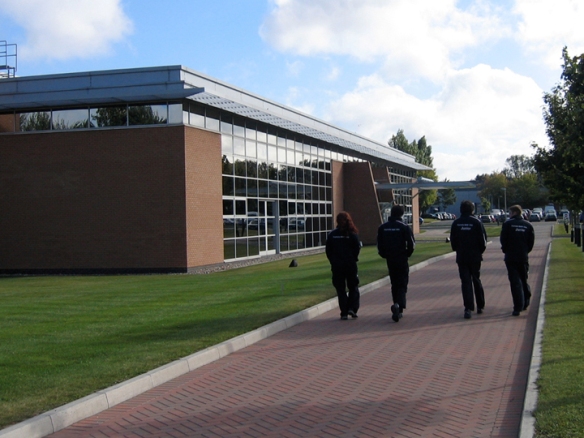 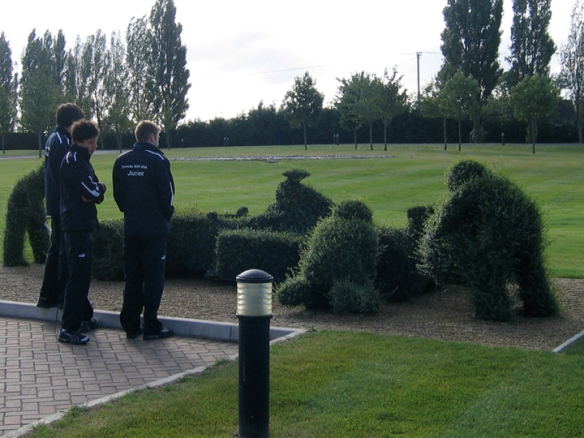 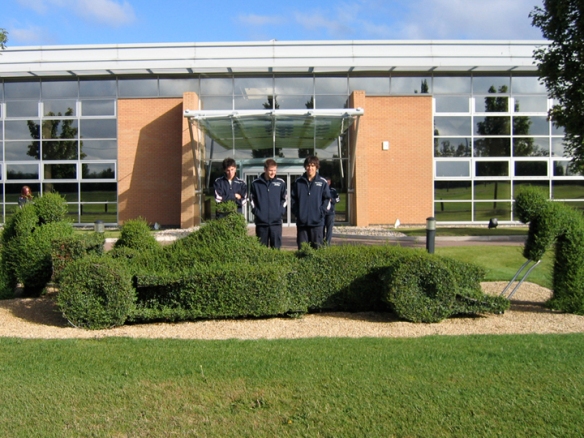 Jonathan met us in the lobby of the factory and after introductions, led us on the 100 or so meter walk to the Williams Conference Center – where our tour would begin.

None of us actually saw it happen. And it could have easily happened to any one of us. But it happened to be Jonathan’s time. You see, the walk from the factory to the conference center is outside. The wind tunnel was on our right. The ‘world’s fastest shrubbery’ was on our left. The rare-for-the-UK blue sky had at least one bird flying above. And so it happened.

Jonathan Williams got pooped on.

Not only did none of us see it happen, but Jonathan didn’t feel it either. This, in hindsight, was extremely odd given the mass and composition of the poop.

Jonathan Williams in the light blue – but soiled – dress shirt, starts our tour in the lobby.

The “Alan Jones Room”. Is there one bottle out of place? I think not.

Sometimes being the Series Manager means that you have do those things that no else wants to do. So, I separated Jonathan from the giggling future Williams F1 wanna-be drivers, and told him that he’d been hit. His first reaction was to reach for it. To confirm its existence. It’s a natural reaction. I grabbed his wrist in mid-flight like a Kung-Fu master blocking a lethal blow. “You don’t want to touch that”, I explained and I eased him towards the rest room.

Jonathan emerged about 10 minutes later, sporting a new team fleece, and continued the tour as though nothing had happened. We all learned a lesson from Jonathan who is a class act. That lesson – Shit happens and you just carry on.

The Williams Conference Center has one of the world’s greatest collections of race cars and Jonathan knew the history of each and every one. Standing amongst this Championship-pedigree and learning some real behind-the-scenes detail was an extraordinary experience. One we’ll never forget. 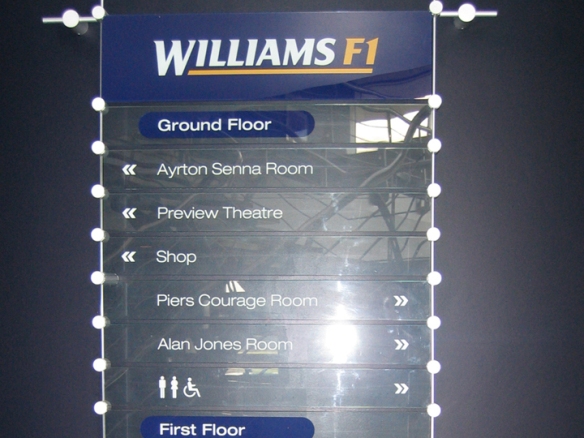 We saw the trophy room, the theater, the Hall of Champions and much more.

Spectacular, and now, time to head back to the factory. No photographs are allowed in the factory. As you’d imagine, it was clean, organized and was operating with coordinated precision. The exhaust systems for these BMW engines are still made entirely by hand and we all got to feel how feather-light they were. An engine fired up in main service bays. BMW staffers are always on hand when an engine is fired. In fact, the engines won’t start without them plugging in their computer to allow it. Cars and equipment were being loaded for the next race event, and another completely separate, dedicated team of engineers, mechanics, aerodynamicists and other specialists – including drivers – were prepping for the Silverstone test day.

We couldn’t wait for that. That was why we were here.

One more kinda unusual thing happened while at the BMW Williams factory, and I apologize as my recollection of the details are foggy. Somehow, for some reason, James Davison ended up on the ground doing push-ups. There is no doubt that if James could do 300–400 push-ups, Jonathan Williams would instantly hire him to drive their F1 car. No doubt. But unfortunately, that wasn’t what happened. What happened was that James hurt his upper back/neck area.

He couldn’t move his head.

So, Jonathan calmly picked up the phone, called the team’s chiropractor and ordered immediate service for young James. Within minutes, we were following Jonathan into Grove and then sitting in the lobby of the “Official Chiropractor of the BMW Williams F1 Team”.

James got semi-sorted and as we reflected on an incredible day, we also couldn’t wait for the upcoming test session at Silverstone. 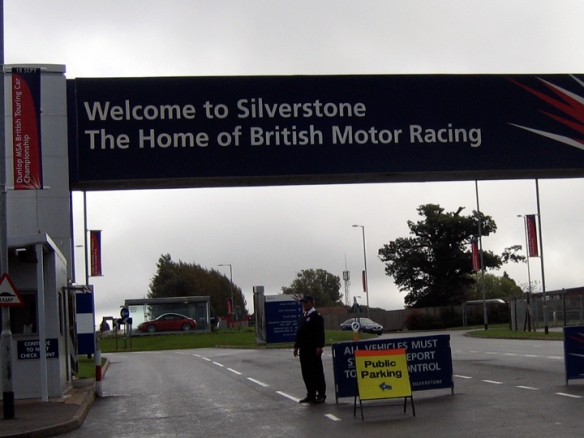 Today we would attend the BMW Williams F1 test at Silverstone. We would be treated to a private test and our host was Jonathan Williams, son of Sir Frank Williams, CBE, who founded Frank Williams Race Cars in 1966.

The drivers that were testing on this damp and then sunny, and then damp, and then sunny day were Nico Rosberg (@nico_rosberg) and Antonio Pizzonia (@AntonioPizzonia).

Nico is now driving for Mercedes alongside (or in front of) Michael Schumacher, and Antonio is racing mostly in his home country of Brazil.

Jonathan set us up with headsets so that we could hear the interaction between the engineers and the drivers. Our agenda was that we would start out in pit lane and take that in for a while, then Jonathan would take us to some of the great corners that make up this historic track. Copse, Maggotts, Becketts, Stowe and Club, to name a few. After that, we would do lunch with Pizzonia and then go back to pit lane for the remainder of the test.

Of course, it was all very interesting stuff. Pizzonia had an incident and even though it was a private test, they covered his car up to bring it in. “Private” might be the wrong word, as the Panasonic Toyota Team and Ralf Schumacher were also there. And the Williams marketing department did have some sponsor guests, although they didn’t get near the access that we enjoyed.

My biggest takeaway from the actual testing was how the team communicated. Very precise. The drivers were just one spoke on the wheel. Without getting too technical, or too boring, here’s kinda how the testing went; the car would go out and do a few laps, and then come in for adjustments. The track was drying, but was wet enough that they were using an intermediate tire most of the time. But here’s where it got interesting (for me anyways), instead of waiting to see what lap times would result from the changes, the engineers TOLD the drivers what the time would be BEFORE they went out. And they were right – most of the time. This was amazing stuff.

At lunch, Jonathan and Antonio stressed work ethic, and that burning desire to succeed, that they had witnessed, first hand, in people like Ayrton Senna, Nigel Mansell and Alain Prost. 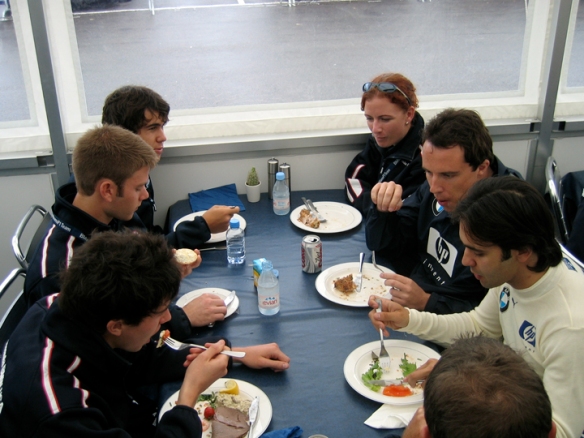 So, after lunch we went back to pit lane and the choreographed, synchronized testing continued. The team that was here was a dedicated test team. They did not go to races. They tested things and stuff on the cars and delivered valuable data back to the ‘other’ team. 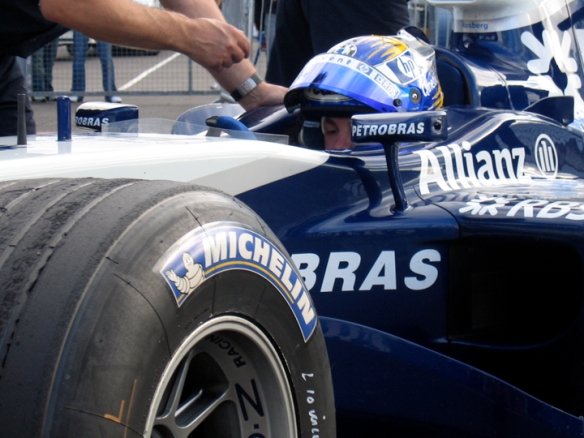 Around 3:00pm, testing was over. We were escorted into the garage and in a bit of a flurry, James, Robert and Reed were told to quickly remove their shoes. They were going to be allowed to sit in the car that had just finished testing. “But you have to be quick!!” they were told in a forceful, boisterous tone. Reed was first. In – quick picture – get out – quick. Next James – same thing, make it quick, and finally Robert. Now get out of here…. Quick!! 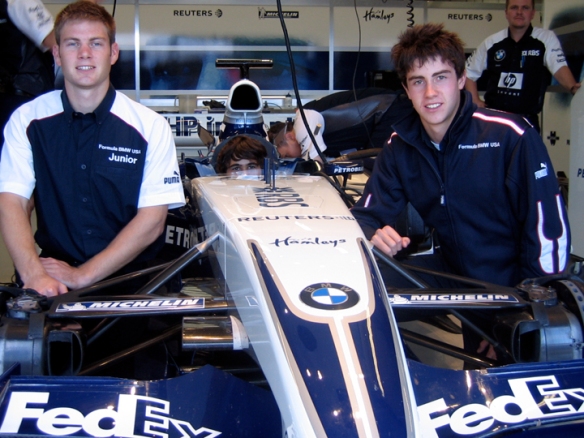 Well, this wasn’t the first rodeo for the BMW Williams F1 team. This was full-on theater, obviously rehearsed, and all with the goal of making our three young drivers believe that their shoes were ‘gone’. The entire team erupted with laughter and for this team of highly trained pros, this was their finest moment on this day, and clearly the moment that they enjoyed the most. And then, they made James, Robert and Reed stand around in their socks for quite some time before the shoes were finally retrieved. 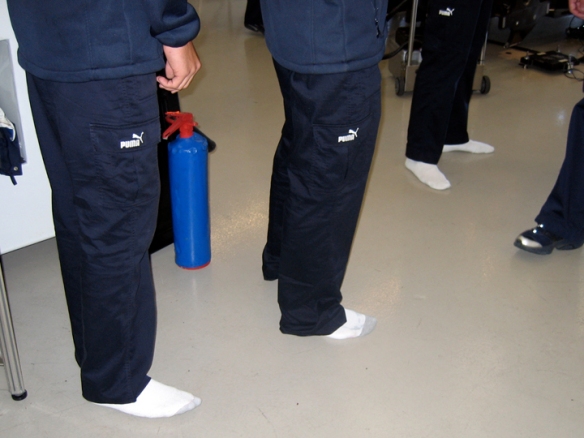 What a trip. Marshall amplification. The bird-poop incident. And the up close and personal look at one of the world’s premier race teams. Great memories for all of us because of the generosity of Jonathan Williams, the BMW Williams F1 team, BMW North America and BMW Motorsport in Munich. It was a life-changing trip.